Reindeer and spaceships on the Stromness headland

The zodiacs prepared to land on a small beach across the bay from the Stromness whaling station. Over the steep headland lay Leith whaling station, where Europa would re-anchor and collect us. The kelp is thick along these rocks, giving us a challenge to get close enough in to land. The thick fronds stall the outboard engines and can even damage them if you’re not careful, so it is all too easy for the dinghies to get stuck in the forest and have to be paddled free. Or, in extreme circumstances and shallow water, for someone (in this picture Katelynn) to get out and push.

Eventually we were all ashore and Jordi set off at his usual fast pace up the steep slope both along and beside a narrow stream that rushed over the rocks between the fine grass. Not having done the Shackleton hike this was the first grass, except the coarse tussac, I had seen since Puerto Williams, and I’d forgotten how very green it can be.

We crossed a vertiginous scree field to emerge on rock and more familiar lichens interspersed with tufts of coarser grass. Ahead was a pile of rock with a fine view over Grass Island and Stromness harbor. At our feet, among the tufts, ivory shone. An almost complete reindeer skull grinned at us, antlers still intact. 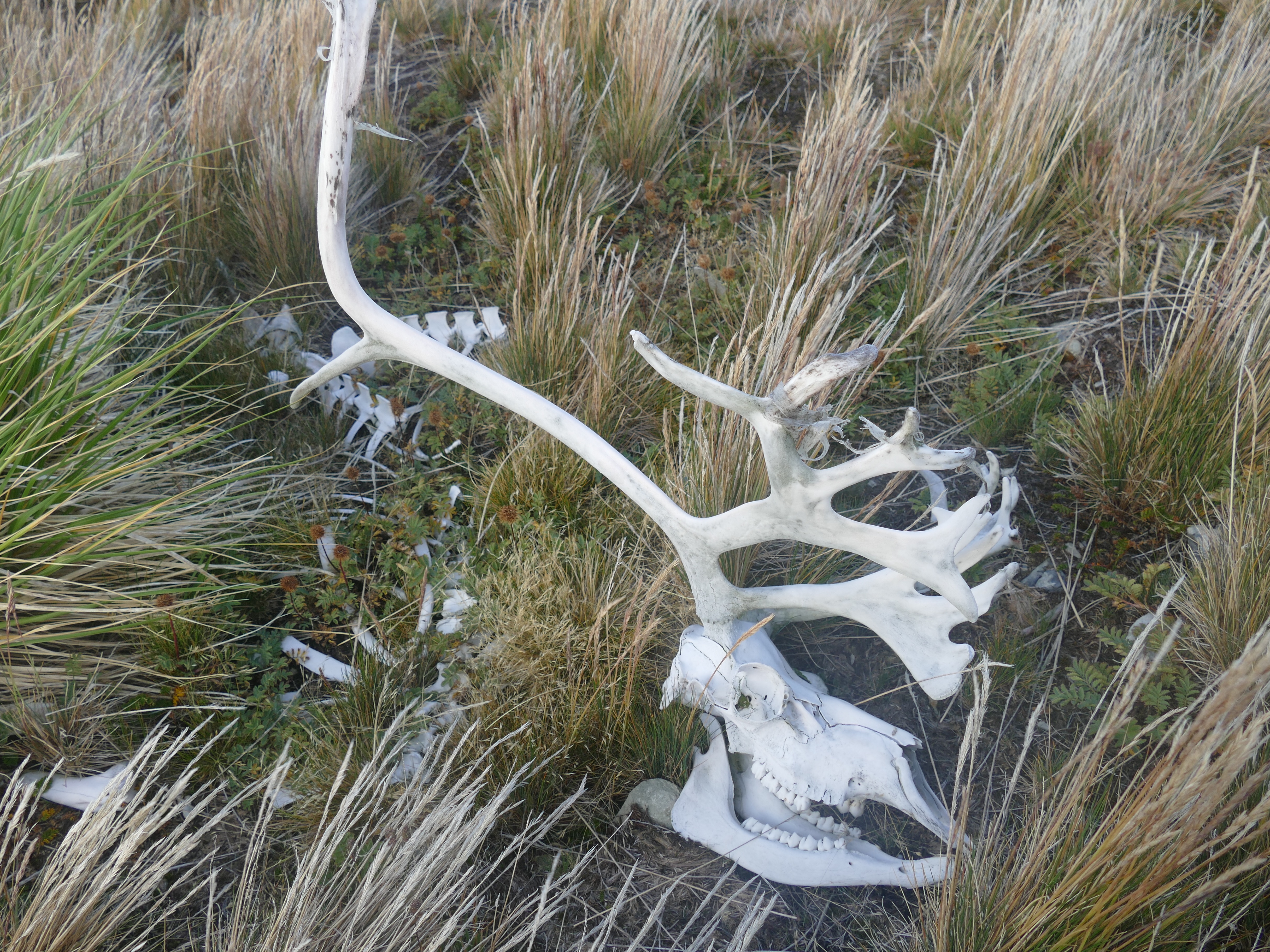 The whalers introduced reindeer to the island in the nineteenth century, as an alternative meat source. They were able to survive the harsh winters, looking after themselves and pawing aside the snow to get at vegetation. Of course, they were extremely bad for the unique ecology because they not only ate the grass but they trampled down the mounds on which the tussac grass grows. The narrow channels between the mounds, often damp with nutrient rich, smelly water, are home to many birds, safe places to nest. Loss of tussac wipes out their homes, especially the breeding sites of the wee pipit.

Reindeer live on South Georgia no longer, an invasive species wiped out in the ongoing campaign to restore the island to its original state. Other challenges are rats and dandelions, both being tackled by the admirable South Georgia Heritage Trust. (More about them when we get to Grytviken.) In the meantime, these skulls, horns and even bigger remains are littered around the grasslands, not often on the beaches but higher, where food could be found.

Having admired the view, our path dipped down and across a valley full of fur seals before we climbed again to the headland overlooking Leith harbor itself, and its large whaling station. During the Second World War, this and Grytviken were the only whaling stations kept open on South Georgia, a vital part of supplying Allied Fleets. It was in this harbor that German raids struck, badly damaging the Norwegian whaling fleet. 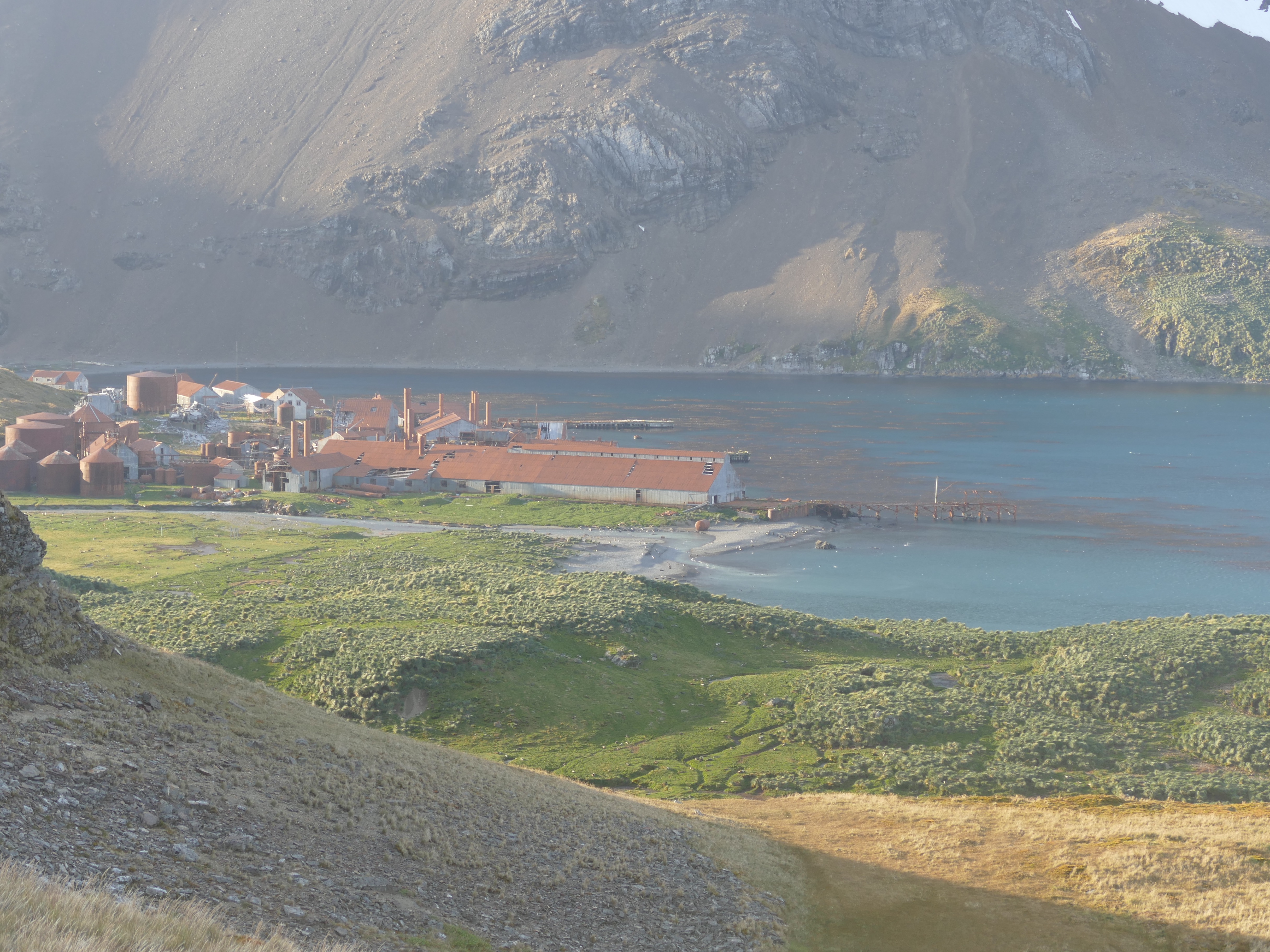 After that, Allied command put gun emplacements and pill boxes up here, covering the entrance to the bay. Today the guns are rusty, photobombed by seals, and the small sheds rot in the wind and snow. Below us the station looked rusted and haunted, a huge industrial complex where thousands of Scots and Norwegians came for their year or so ‘on the ice’, enough to buy a home or start a business. A harsh, bloody business it was. 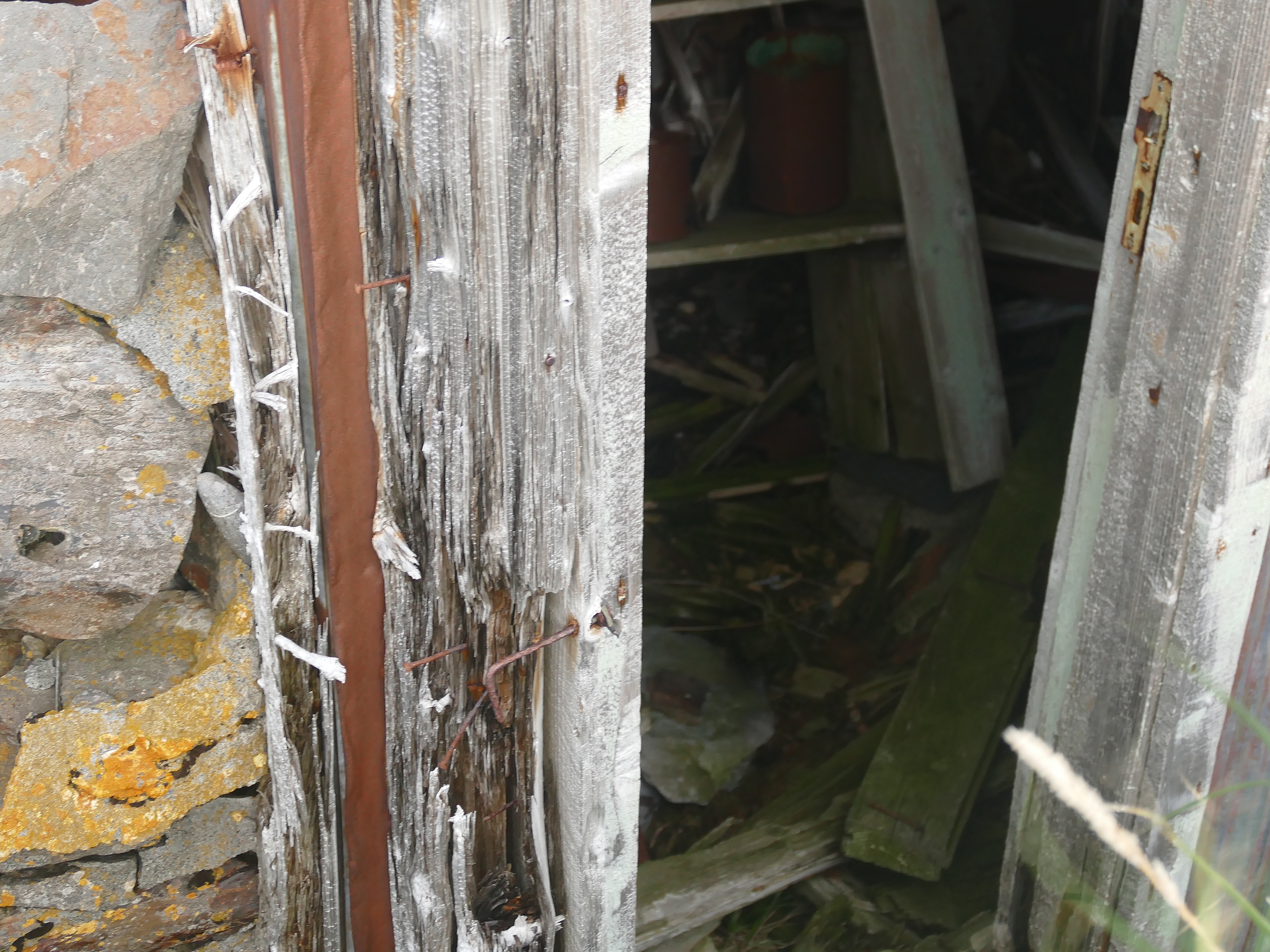 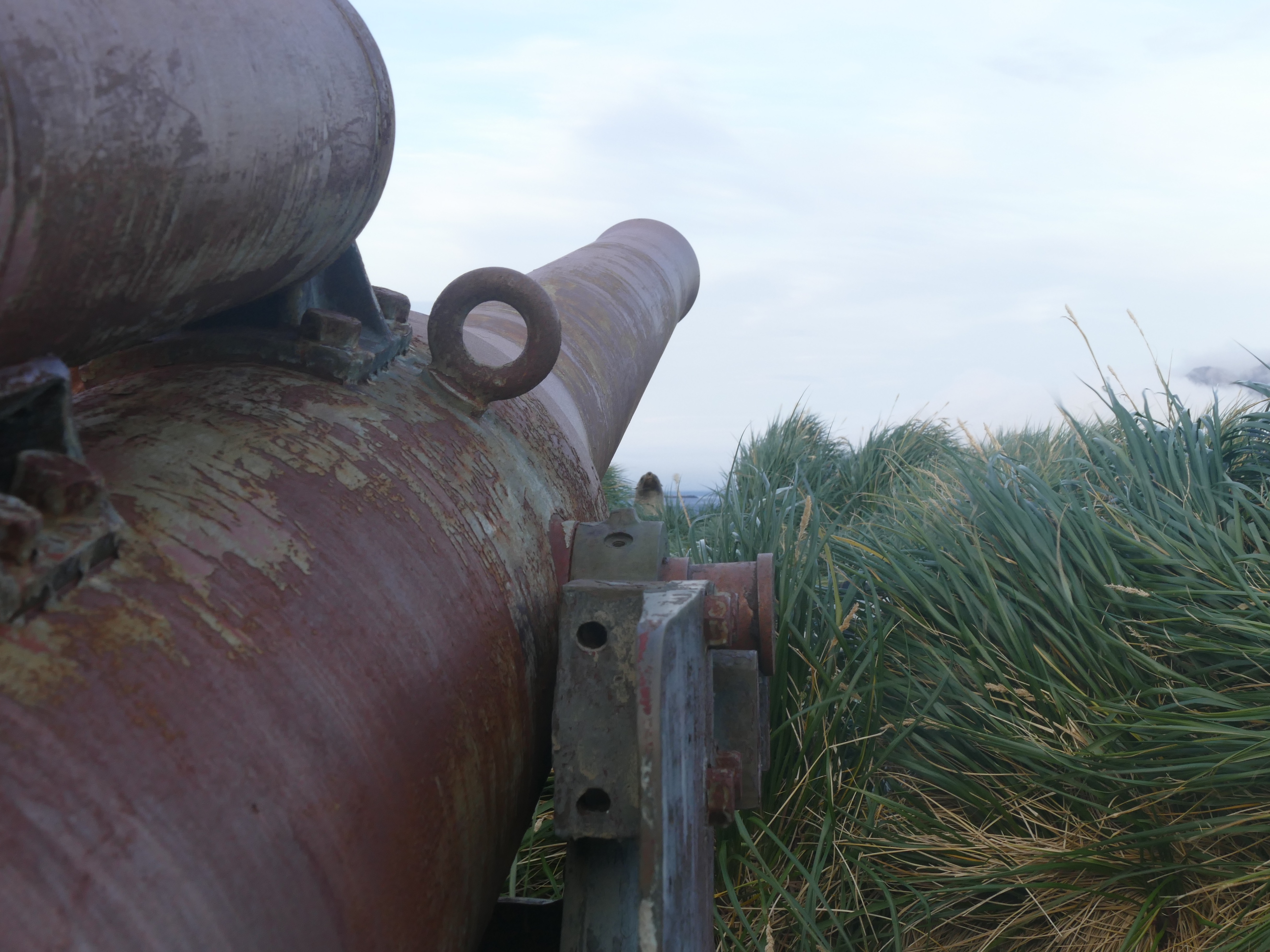 At the top, Jordi got a radio message from Harko. Europa’s anchor was fouled and it wasn’t coming up any time soon. She wouldn't be leaving Stromness that evening. We would not be able to go down into Leith and we needed to head back the way we had come. The sky had already begun to darken a little so it was time to get a wiggle on.

So we went back through the fur seals and up the steep slope to where the scree began. At the top, though, we paused when we saw the amazing clouds over the peaks on the other side of the bay. It looked like spaceships taking off from the interior for the centre of the galaxy. Or perhaps gravity-defying, silent invaders swooping above us to investigate the possibilities of sinking beneath the Southern Ocean beyond our reach. 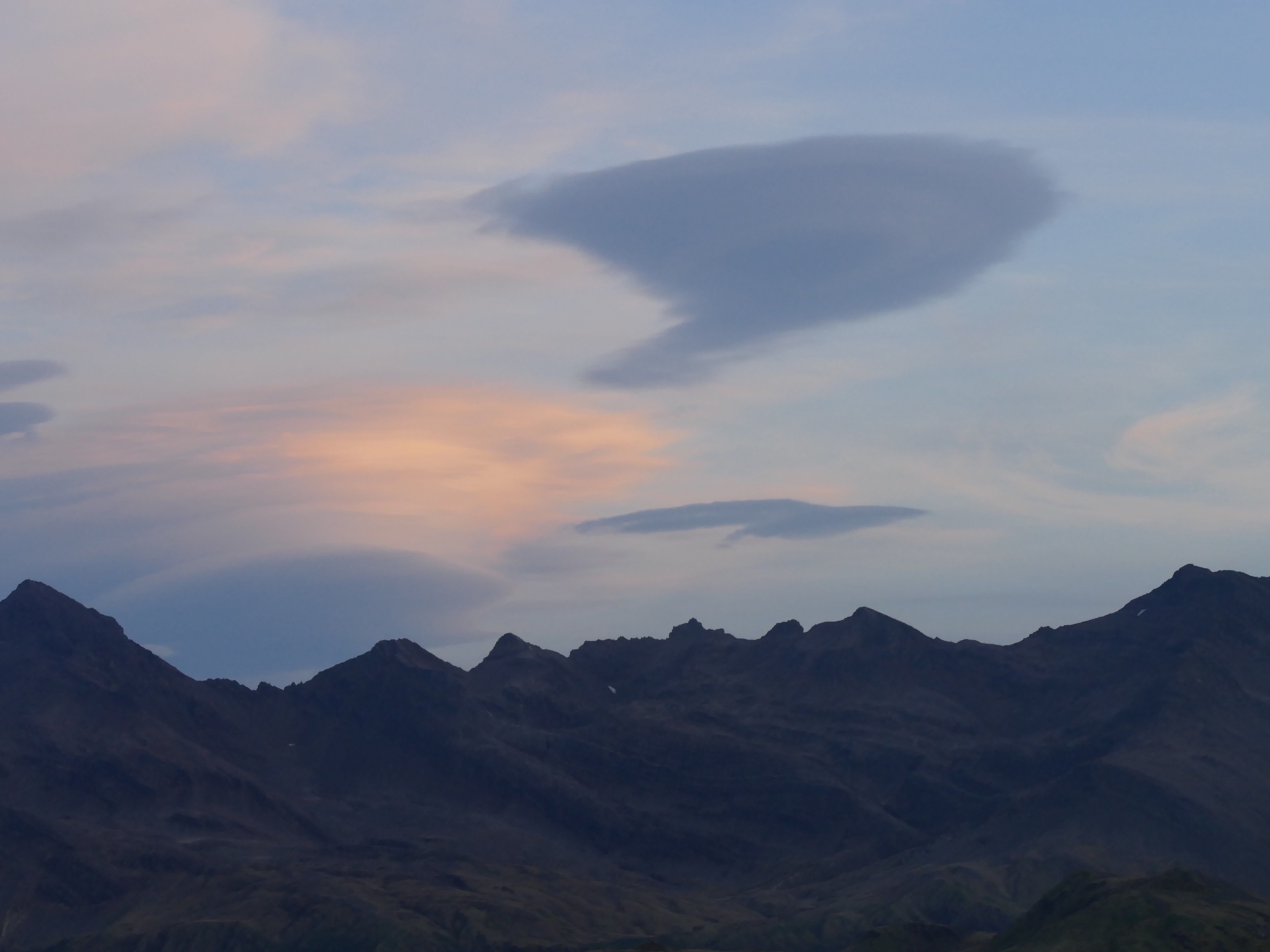 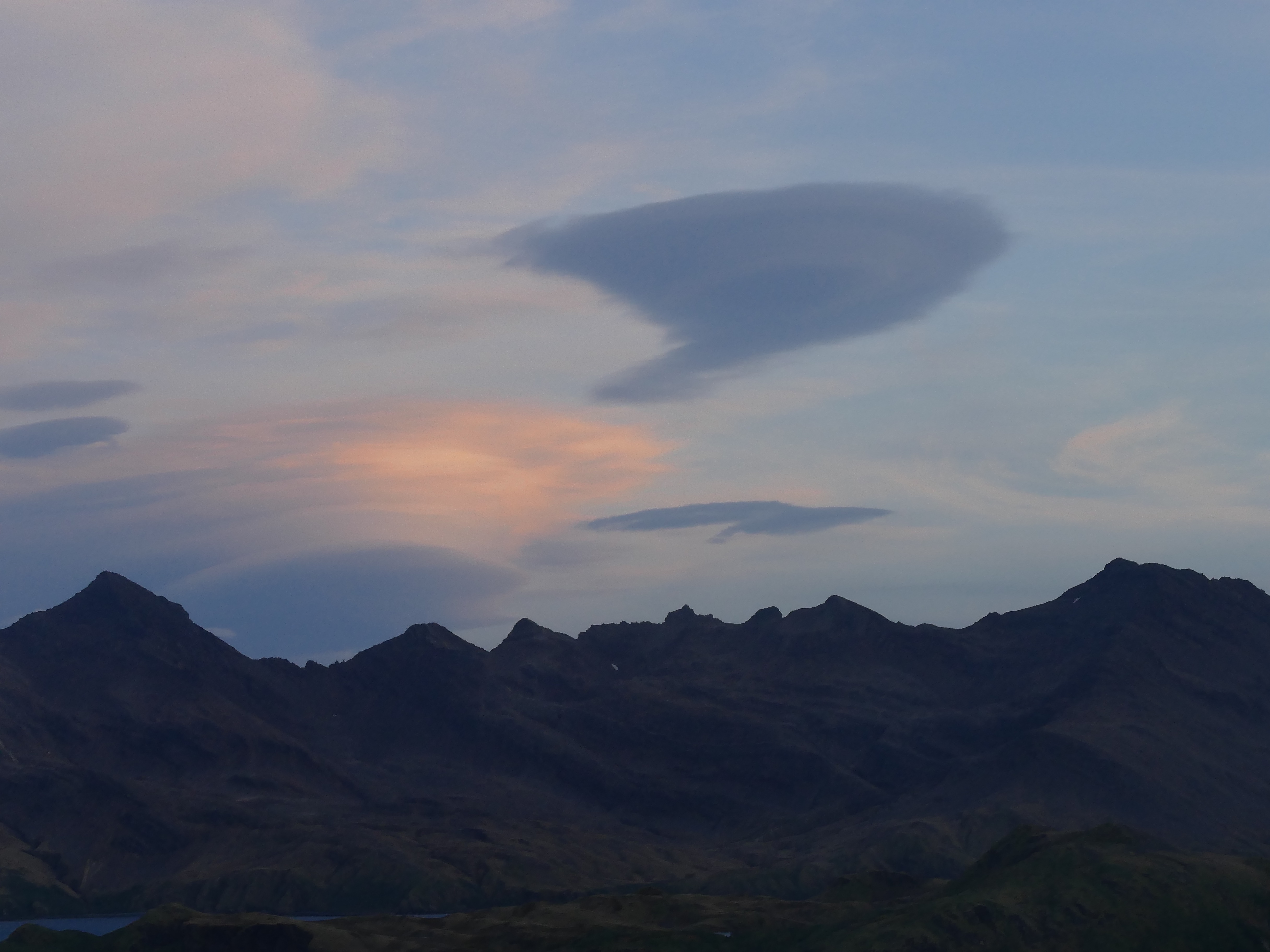 Despite the pink and orange dusk we took photos and then headed down and down again, this time to another beach. The wind was getting up now and I was glad I had carried warmer, waterproof trousers all that way as I clambered into the last zodiac. Out in the harbour there was quite a chop. An abrupt turn across the waves was the only time in the whole trip that salt water lumped itself into my oilskin jacket and congealed inside my underwear.