T is for Treaty #AntarcticAlphabet

If the Treaty dies, the continent dies.

When treaties are broken, people die.

Treaties are agreements between those sovereign figments of our collective imagination, the nation-state. Itself an Enlightenment child, the ‘nation’ is our fundamental global organising principle. For the lucky majority, our nationality is the ground on which we stand, the sandcastle from which some of us deride the stateless and the lost.

(Yet nations are not simple, not kind nor fair. Nationalism allows the gullible to abdicate power to the greedy. Most 21st century nations exist and persist because of rapine and genocide. We are here because you were there. Take this contradiction into our imaginations to become part of the rocks on which we build the future.)

The nation, that maker of treaties, is a collective imaginary, as true in the South as in the North. Together, we have agency in the way the world works. We can keep a treaty, or remake it, or we fight. It may be complicated to decide the course of honour (just look again at Syria) but the basic choices are stark.

Antarctica is the same but different. The unique Treaty of 1959 shelves sovereignty, without denying its possibility. Instead of defensive borders it commits the continent to peace and science. Collaboration and research are the heart of the imagined enchantment.  Today Antarctic governance is, according to Prof Keane at Sydney University,  “a salmagundi of clumsy power-sharing institutions…  Entangled in world-wide webs of interdependence”. 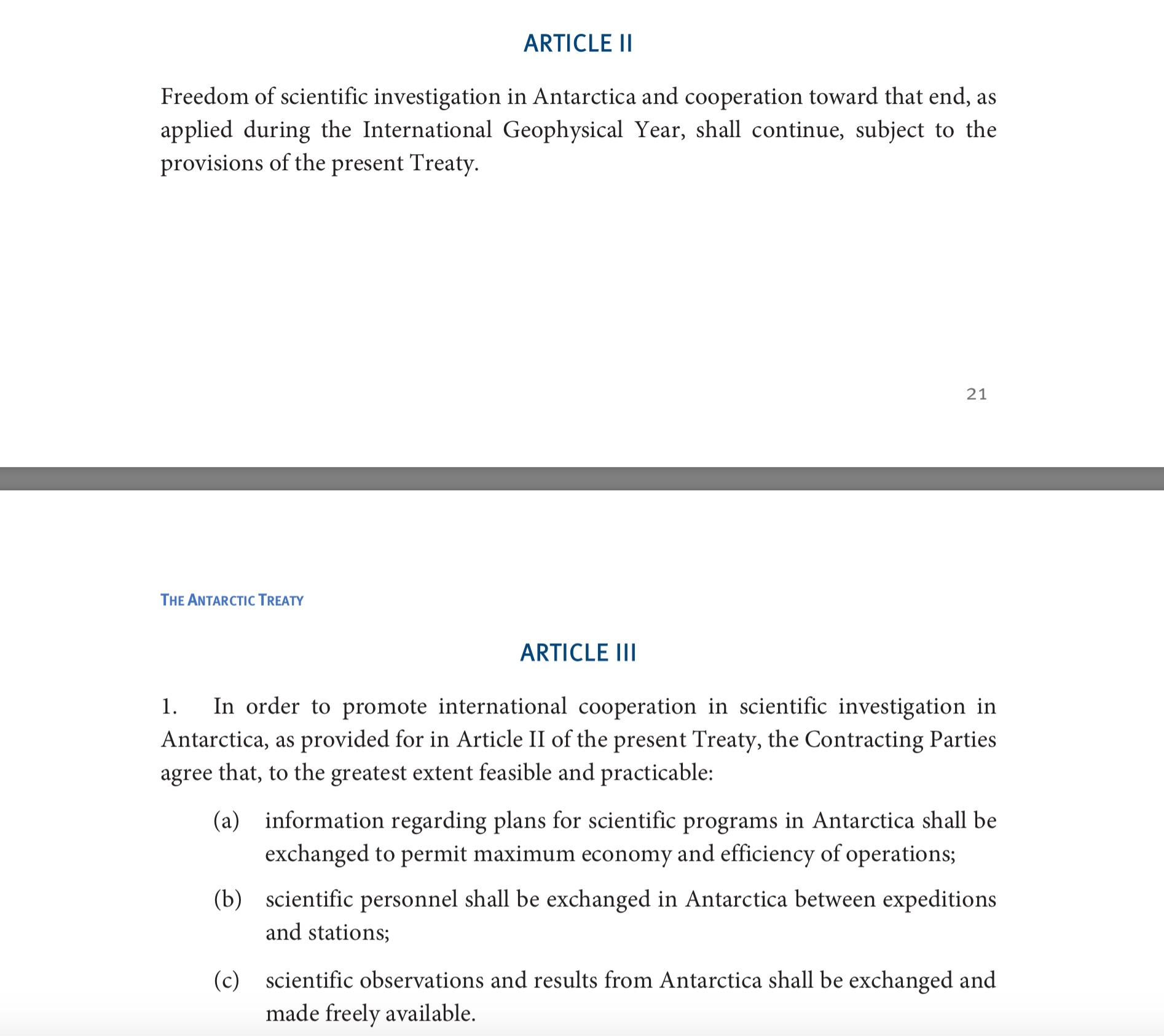 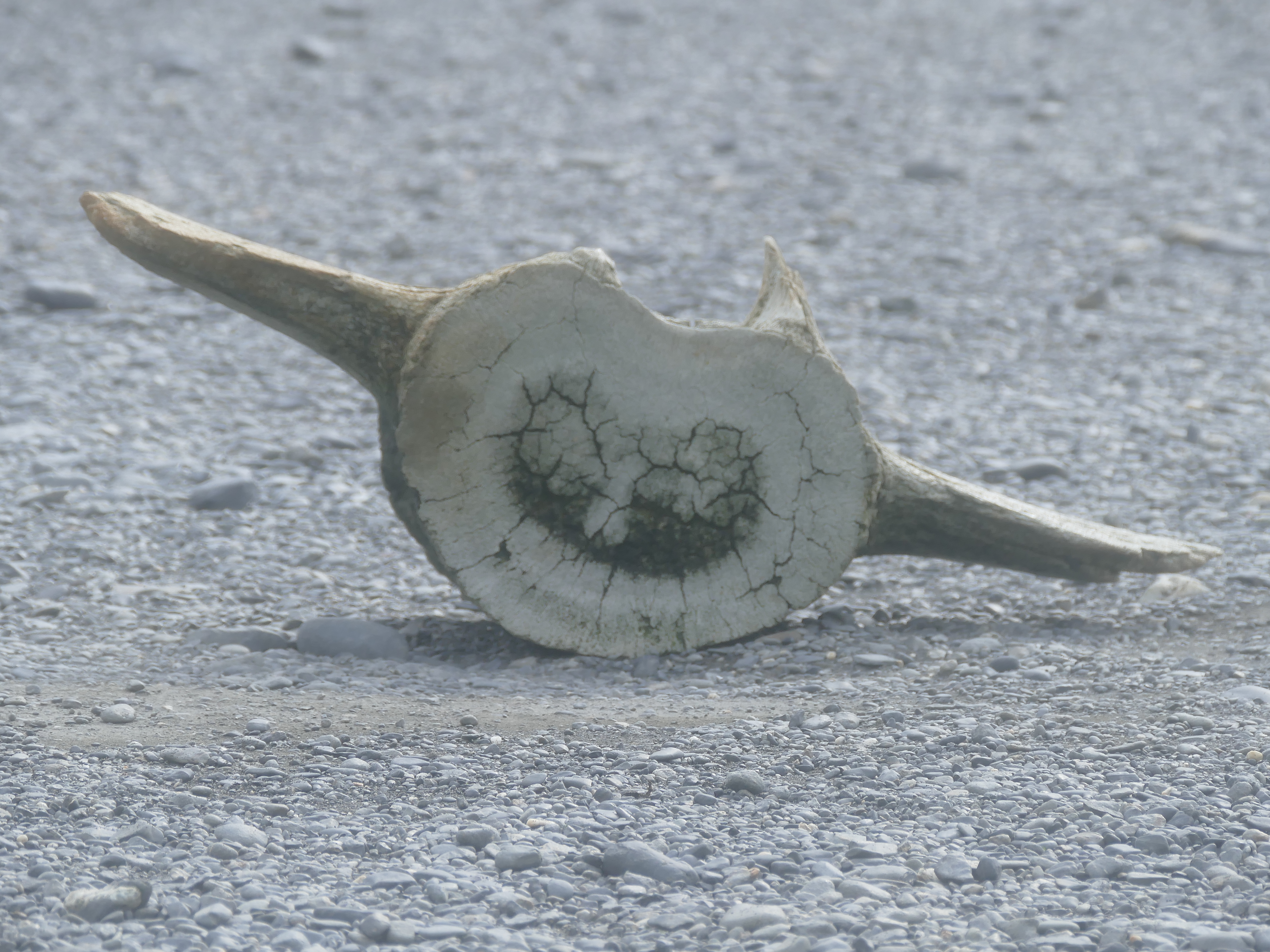 There are no indigenous people in Antarctica. There never were. What resources it has, now the whales are gone and the seals protected, are limited and hard to get at. (There’s krill, of course, those tons of biomass, managed under another science -based treaty.) If we see, as some suggest, indigenous voices as ‘second class’ how much more the penguins of the south?

But Antarctica is not, it never was, stable and unchanging. The high ice-desert reflects grinding cycles, and the rapid changes of industrialisation, the poison enabled by the stability of the north. Thwaites glacier, one of the largest on Earth, is melting.

How does the reality of the continent, its dynamism and complexity, relate to our imagined nations, our treaties and compromises. To messy humanity? Keane argues that the Antarctic Treaty and consequent governance panoply “brings to life …new ways of imagining the political inclusion of the biosphere as a legitimate, potentially equal partner, within human affairs.”

I am less sanguine; after all the blood of penguins matters less to many of us than the blood of puppies. The powers-we-live-with ignore Antarctica, let the scientists play, because it is just too hard. There are lower-hanging fruit in the Arctic Sea, Canadian tar-sands, even in Greenland’s rare-earth mines. It is humans who write history, not krill, even if the planet really is ultimately a self-regulating system which will look after itself.

Yet all treaties are built on compromise, on the serendipity of individuals and time, the chances of history taken or missed. The Antarctic Treaty, born of the Cold War, is a collective re-telling, a new narrative for the South. Despite the depredations of global heat, we have done some things right down there. We can decide to relearn the power of such myths, a millennial imaginary. We are nations: it is in our power. 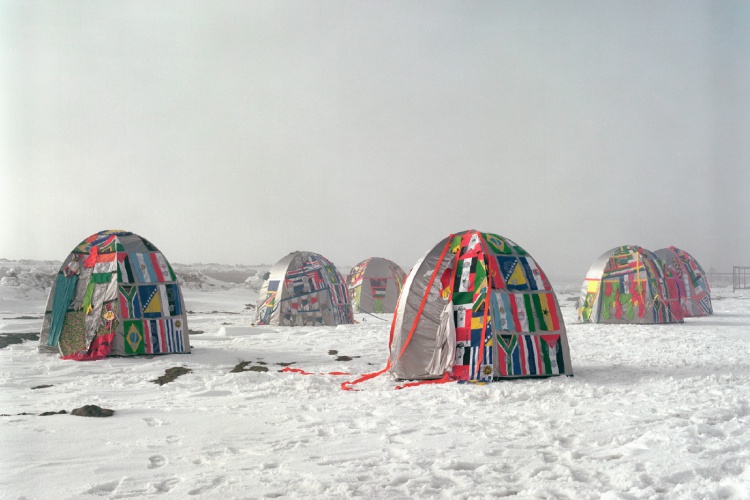 The image at the top of this post is a composite of Exasperation Inlet from Exasperation Point. Cape Fairweather is on the left. Crane Glacier enters the inlet far to the left and out of the frame. The foreground view is entirely sea ice, at most a few meters thick. There are a few icebergs in the foreground and many more as we approached the glaciers from which most of the visible icebergs have been calving. Prior to the disintegration event in February 2002, the entire foreground view of this image would have been of the Larsen B Ice Shelf which was several hundred meters thick. The aerial photos were taken by a team led by Ted Scambos in 2012, as part of the National Science Foundation LARISSA programme, working with, amongst others, the British Antarctic Survey.

The image at the end is from Ephemeral Village No Borders by Lucy + Jorge Orta. Their body of work Antarctica addresses issues relating to the environment, politics, autonomy, habitat, mobility and relationships among peoples. This temporary encampment on the Peninsula encapsulates the hopes, opportunities and frailties of the Antarctic arrangements.

The photos are linked to the relevant sites.