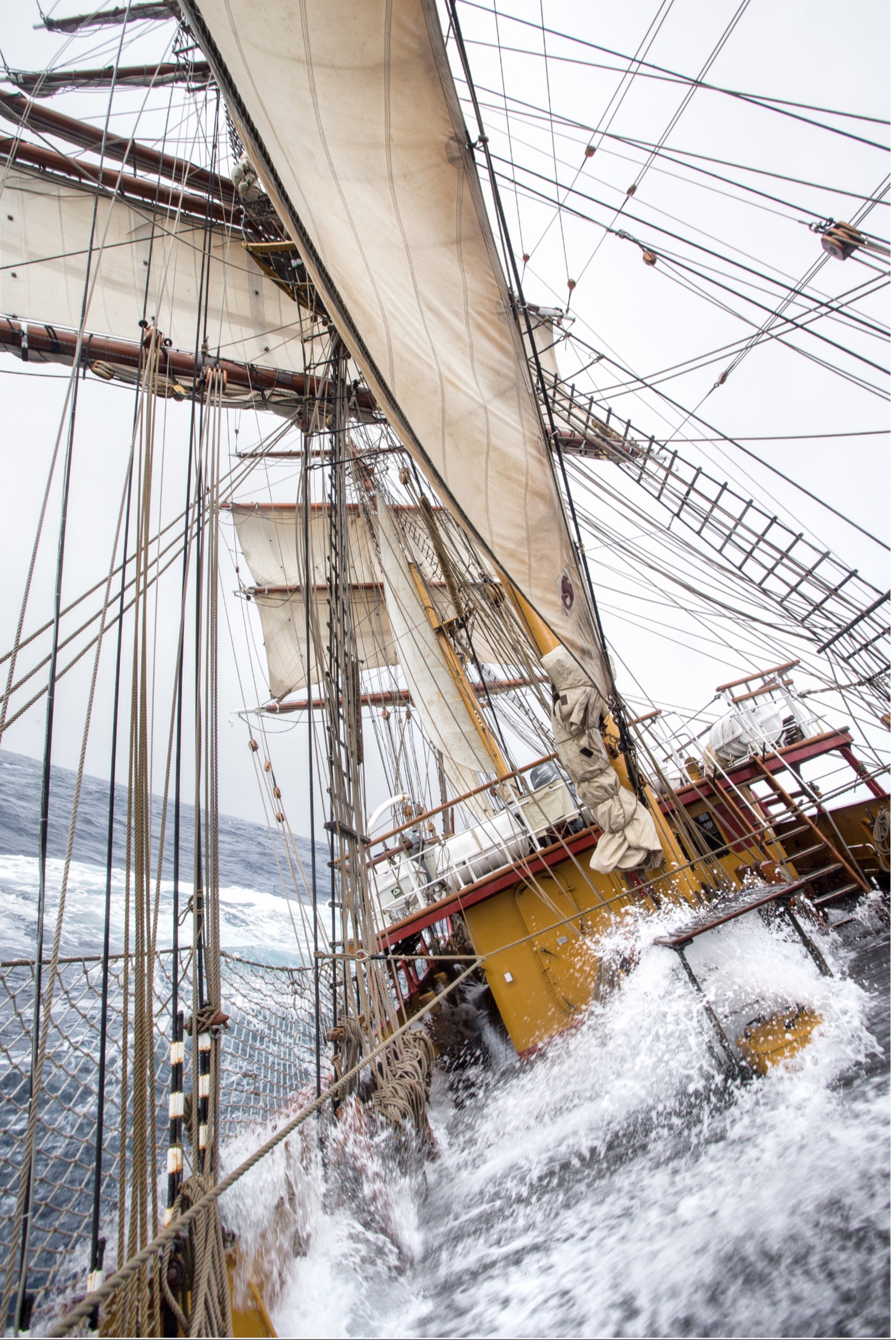 The stretch of water between Cape Horn and the reaching finger of the Antarctic Peninsula is Drake's Passage, or 'the Drake' in onboard shorthand. It has a fierce, scary reputation, as Chichester's words explain. The passage is named after Sir Francis Drake. He tried to sail East to West round the Horn in the late 1570's and it took him over three months, indicating the great strength of the prevailing seas.

We could not leave our anchorage at the Horn until the Chilean pilots had been taken off Europa on a pilot boat sent out from Puerto Williams. It took a while for the boat to come, and even as we waited the weather deteriorated.  I took the video below at the time: we were getting bounced about by increasing wind and waves, and the rain began. We knew the forecast wasn't great. Eventually the pilots were able to leave and Europa set sail for Antarctica.

The picture at the top of this post is by Jordi, our Expedition Leader, taken in the Drake and it gives some idea of the storm we encountered. In his wonderful Expedition Log he comments '

we could also see some birds enjoying those strong winds. Several White chinned and also some Giant petrels are spotted, joining their gliding flight with the more elegant Black browed albatrosses, and even a couple of the small but brave Wilson storm petrels are also seen dealing with those big swells.

Why had the Horn got such an infamous reputation. Anyone reading about the storm winds and waves near Cape Horn must wonder why they should be so much more fearsome there than in the rest of the world.

Off the Horn there are gales of Force 8 or more on one day in four in the spring and one day in eight in the summer. Winds have a lay nature in that they refuse to climb over a mountain range if they can sweep past the end of it. South America has one of the greatest mountain ranges of the world, the Andes, which blocks the westerlies along a front of 1200 miles from 35 degrees south down to Cape Horn. All this powerful wind is crowding through Drake's Strait. The normal westerlies pouring through this gap are interfered with by the turbulent, vicious little cyclones rolling off the Andes.

As for the waves, the prevailing westerlies et up a current flowing eastwards around the world. This great ocean river is forced to pass between South America and the South Shetland Islands. There is another factor which greatly increases the turbulence. The bottom of the ocean shelves between the Horn and the Shetland Islands induces the huge seas to break.

As those of you who were following at the time know, I didn't see much of the the birds or the sea over the next two day. The seasickness certainly took over and I retreated to my bunk. I emerged to make a quick blog about it and understated the weather. At its height the storm gusted at 63 knots with waves of about 8m. It wasn't the worst weather we encountered, but it was the first and it laid out about half the voyage crew. Those that kept functioning get all my admiration, especially as they managed lots of extra stints on watch because the rest of us weren't in the game.

I spent about 36 hours mostly face down on bunk and in 48 hours ate a grand total of 9 crackers. I only threw up once but I think that's because I didn't move much. Mostly, in fact, it wasn't nausea which stopped me but that extraordinary torpor which sometimes accompanies seasickness. I took a lot of  pills - in hindsight maybe too many. Perhaps I should have taken less drugs, thrown up more and actually got up onto the wheelhouse to look at the waves. I had another problem specific to my bunk. On the port side of the deck there is a washboard in the bulwarks. It's held in place by a bungee cord which gave up the ghost shortly after leaving the Horn, so the metal board was banging against the steel hull. It hit the hull just beyond my head in a constant but irregular bang which was very alarming. Of course, it could not be fixed in those conditions, but the end of its crashing was as much a relief as the end of the nausea.

All storms end though, and eventually we were through it and approaching the South Shetland Islands. By the morning of 12 March we had crossed the Convergence into colder water and overnight we passed the 60 degree South line which marks the boundary of the Treaty. We were in Antarctica.