Hope Bay is a deep indentation on the northern end of the Peninsula's finger. By the standards of the region, it is sheltered, a strip of land between the mountains and the sea. The area has a long history in the annals of Antarctic science and exploration.

Here three men from the Nordenskjold expedition overwintered. They had not expected to stay but when their ship could not return they hunkered down in this tiny stone hut and survived on seals and penguins despite being ludicrously ill-equipped for a stay of such duration. When the spring came, they skied to Snow Hill Island in the Weddell Sea to meet up with their colleagues and eventually be rescued. During that winter, staying in this tiny stone hut, they continued with their scientific explorations. Indeed, Andersson, the exhibition's geologist made discoveries that are still cited in scientific papers today.

This area is very important geologically. Under the Treaty it is designated Antarctic Specially Protected Area (ASPA) 148; the fascinating management plan contains this map and describes the area as of great scientific importance for interpreting key geological relationships in the region. Nordenskjold called the mountain directly behind today's main settlement Mount Flora, after the fossils found there; it is the primary site for Jurassic flora found in Antarctica, and has been well documented.

The geological history of Antarctica is formidably complex and only now coming into focus, but we do know that at that time, before the land bridge was severed, there was no polar ice and the area was forested. Dinosaurs walked on those rocks.

There are actually two bases on Hope Bay. The Teniente de Navio Ruperto Elichiribehety Station is Uruguayan, having been transferred to them from the UK. Originally the site had been set up as 'Base D' in 1945 as part of Operation Tabarin, the surveillance of these waters against the Axis navies. It operated as a naval base until 1964, and then transferred in 1997.

We visited the Argentinian station, Esperanza. The coincidence of names is a signal of the contest dead complex relationships in these waters. I commented at the time that the base had a resolutely naval feel, a place marking Argentina's claim on the area. The Treaty may have put all such claims on the shelf but Argentina is keeping that shelf well-dusted. Fourteen children are overwintering at Esperanza as I write this, and indeed the first person known to have been born on the continent was born here in 1978. (This is still very unusual with, as far as I can discover, only 11 people born there so far.)

Esperanza is a straggle of brightly coloured buildings scattered along the flattish skirt of the hills with spectacular views both upwards and out to sea. The tracks, in late summer, are a mixture of treacherous glissades and snow lined ruts. The Argentinians sauntered comfortably along, smiling gently as we slipped and fell. The penguins walked past us to and from the water, flapping their wings and telling us off.

Everyone in Esperanza eats together and of course food is very carefully managed as much of the year there is no possibility of resupply. They offered us hospitality by way of tea and biscuits in their large common room. They were happy to take euros and laid out various fleeces, patches and so on. Despite a twinge of disloyalty to my Chilean friends, I bought a nice red gilet with a fancy logo. It came in very useful later. Meantime, one group of voyage crew set up a pool game, and another nearly missed the last zodiac back aboard because he was thrashing the Argentinians at table soccer. 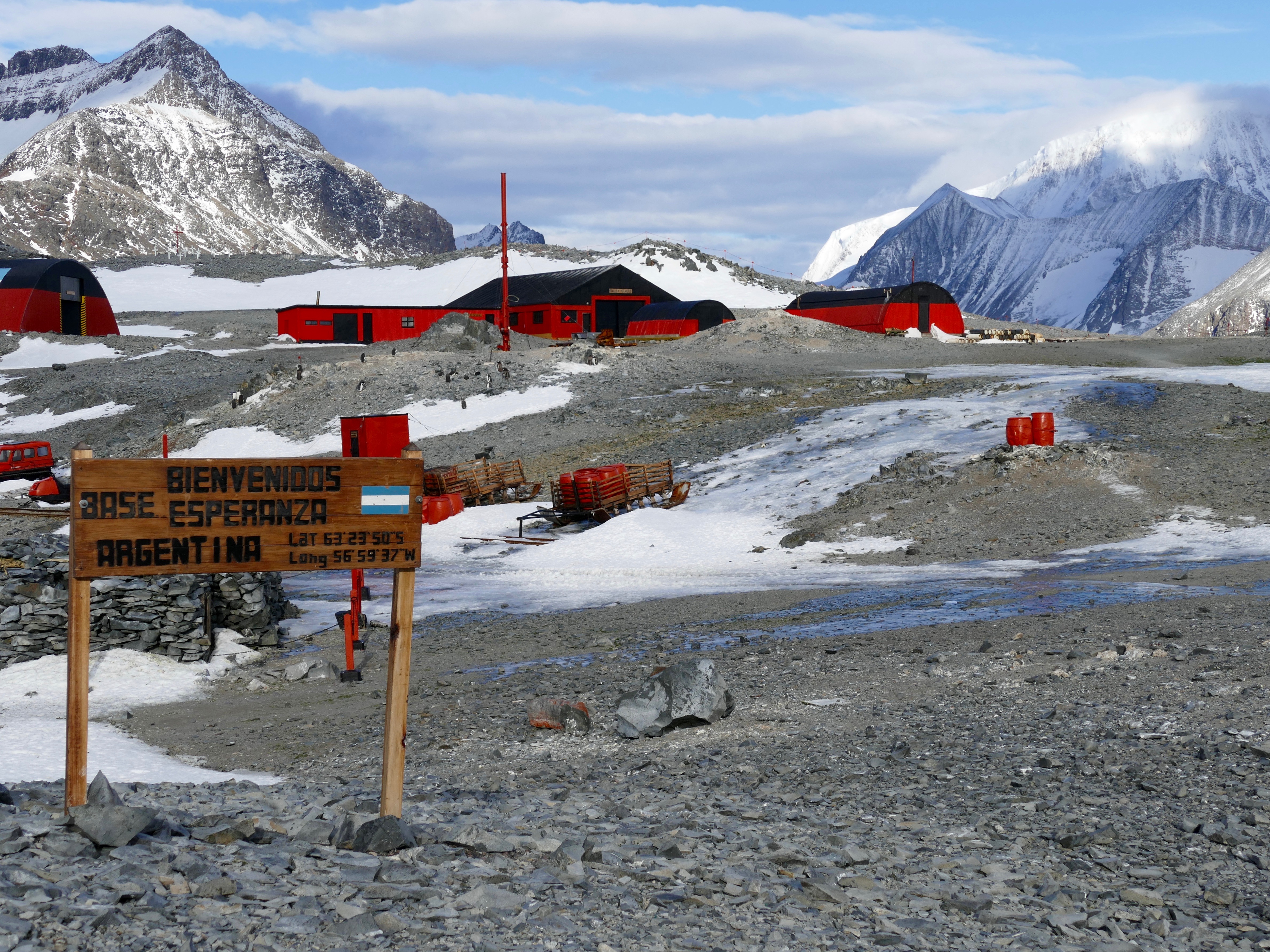 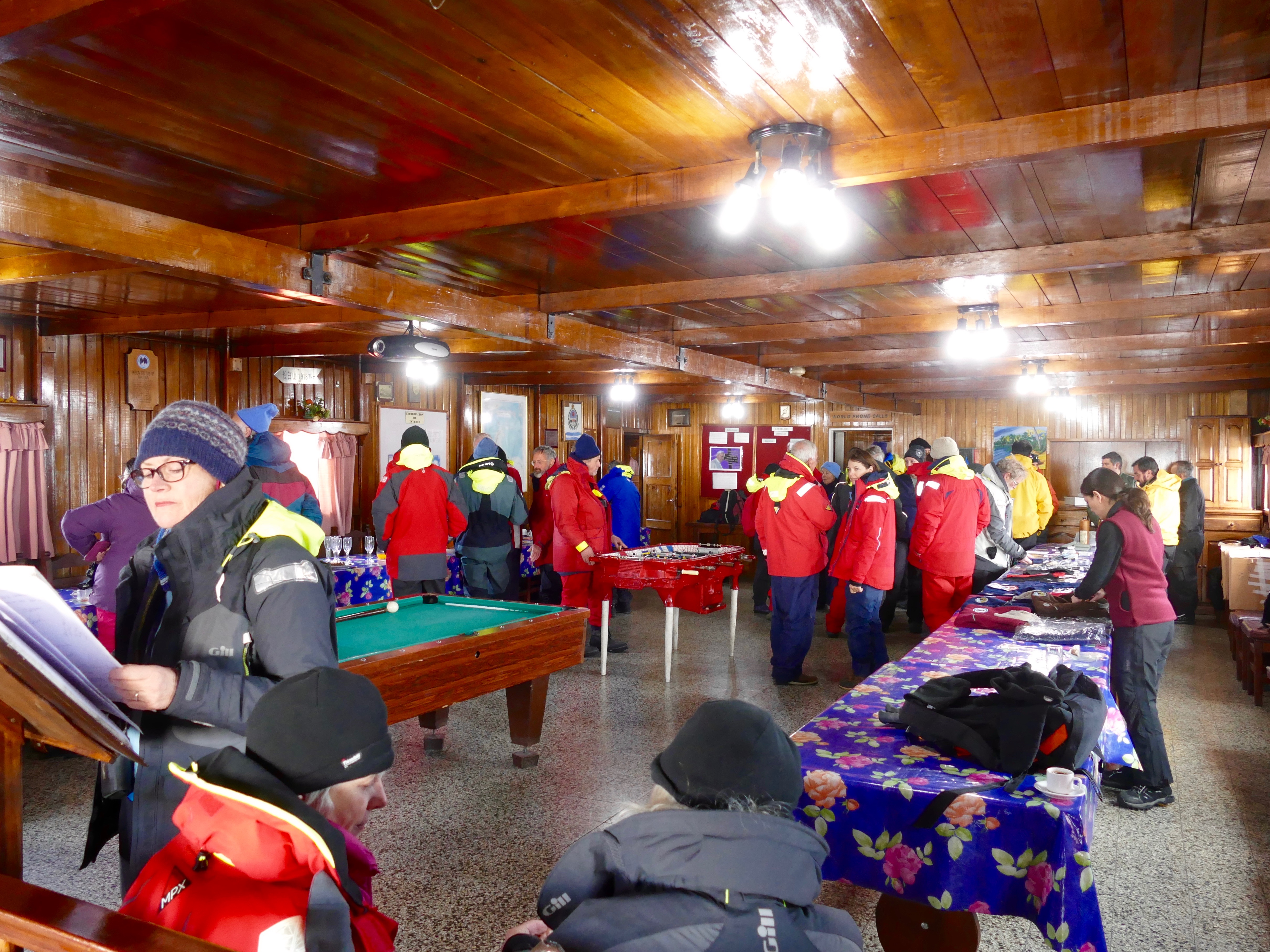 Hope Bay is home to one of the very few navigation lights in Antarctica, the small pillar on this rocky outcrop. You would want to stay well away from it, in the unfortunate circumstances of being forced into the bay in the dark. Where such lights exist they are the responsibility of the neighbouring base,  so this one is maintained by Argentina. There are very few navigational aids in the region: have good charts and try not to be close to land on a dark night would be strong advice. We had the strong advantage of having several crew, including Harko, who had sailed these waters several times before. The prospect of exploring here on a ship reliant on sails, with no charts, as the winter draws in is terrifying. Once again, I salute the bravery, curiosity and scientific determination of the early explorers.